What the fuck.. I want to take my Vespa.. It’s just not practical. Sabina agrees, at least we can fill the car with Mexican blankets and truck stop food. We get a Red Volkswagen Jetta. I wonder if the rent-a-car lady noticed the gleam in my eye when she said unlimited miles. Like a fat kid at a buffet I was going to get every… bit… of those.. unlimited miles. Sabina sits shotgun. She always has a petulant expression on her face when she feels slighted, her mouth tightens and her dark eyebrows cast a foreboding shadow over her watery eyes. Her thick chestnut brown hair cascades down the nape of her neck, Is that a grey hair? I get a thrill plucking them out with tweezers. It’s so calming and Zen. I’ll even have my tweezers handy while we wait in line at McDonalds in case I catch a gleam of silver. She loves it.

At first we drive through the night and listen to Ulysses by James Joyce on audiobook. We got 4 hours in and still had no idea what the hell was going on. I put on the Arctic Monkeys instead. At dawn we arrived in Chicago or Chi Town. You could see Sears Tower, It was immense, At one time it was the tallest building in the world. 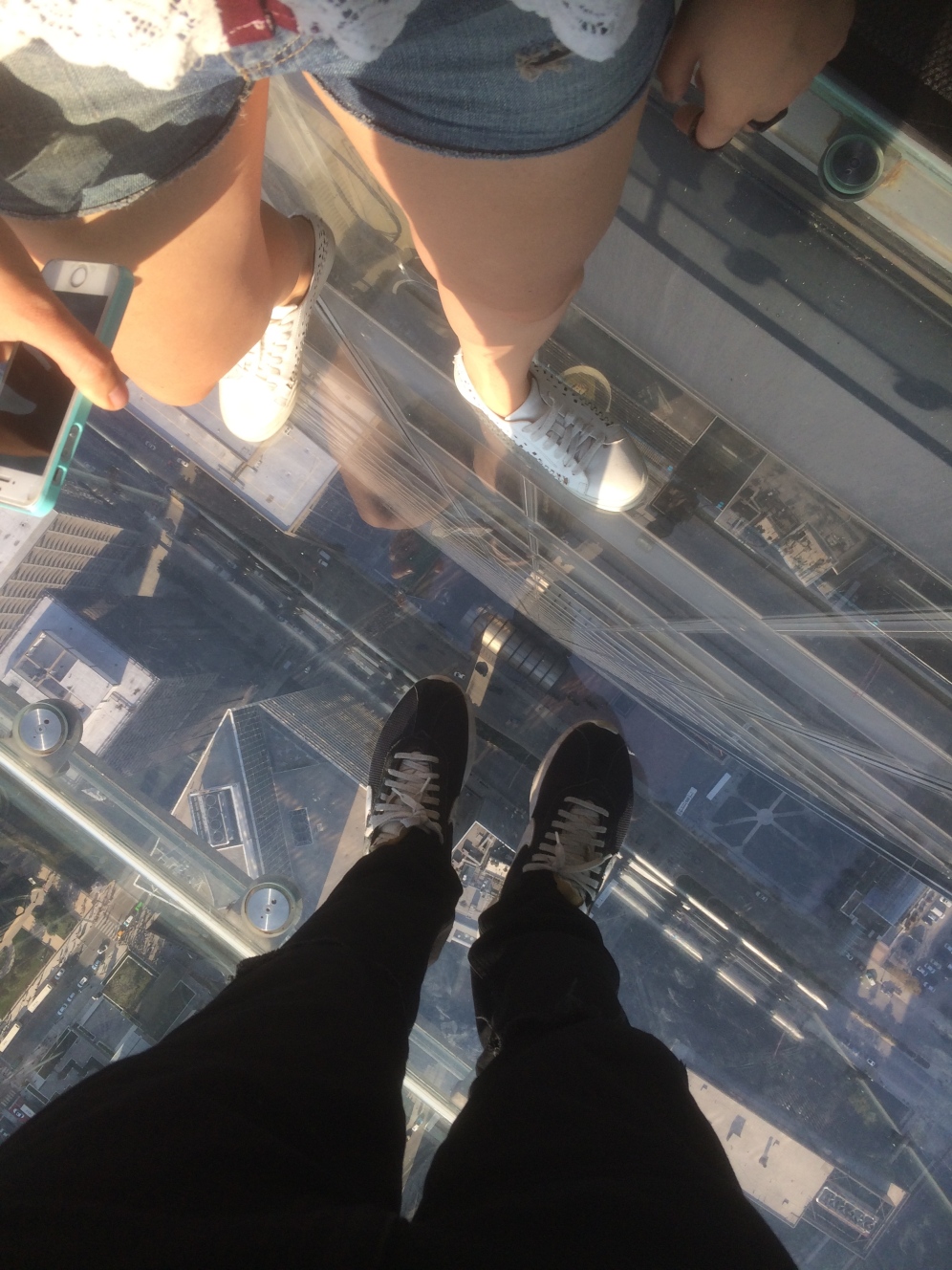 It was ok, a lot of old people were taking selfies. The view at the top was cool I guess I looked upon Chicago discerningly, it didn’t seem friendly just industrialized and everything was the color of burnt sienna. We searched for Chicago deep dish pizza. I was crestfallen when we finally reached a pizza joint.

“ We sell Detroit style pizza” I look at the menu in absolute bewilderment “What the hell is that” I mutter out loud as I look past the cash register dude. I bought it reluctantly. I sat glumly with Sabina and gnawed at it….

Thanks you is what I said.

Fuck you and your Detroit pizza was what I was thinking.

After we combed the sienna street in search of the metal jelly bean sculpture we dipped out. We had so many miles until Yellowstone. Oh yeah I forget to tell you.. we are on a 11 day cross country road trip.

WE ARE VISITING FAMOUS NATIONAL PARKS

ok ok time is of the essence. We pass another truck stop, I love the huge one like LOVES and FLYING J the smell of oil, rubber, and rotating hot dogs is intoxicating. We haven’t taken a shower in two days. My armpits reeks as I thrust them at Sabina in Jest. Problem is she thinks all my attempts at disgusting her are cute and looks at me with amorous eyes. however shit that does piss her off..me on my phone 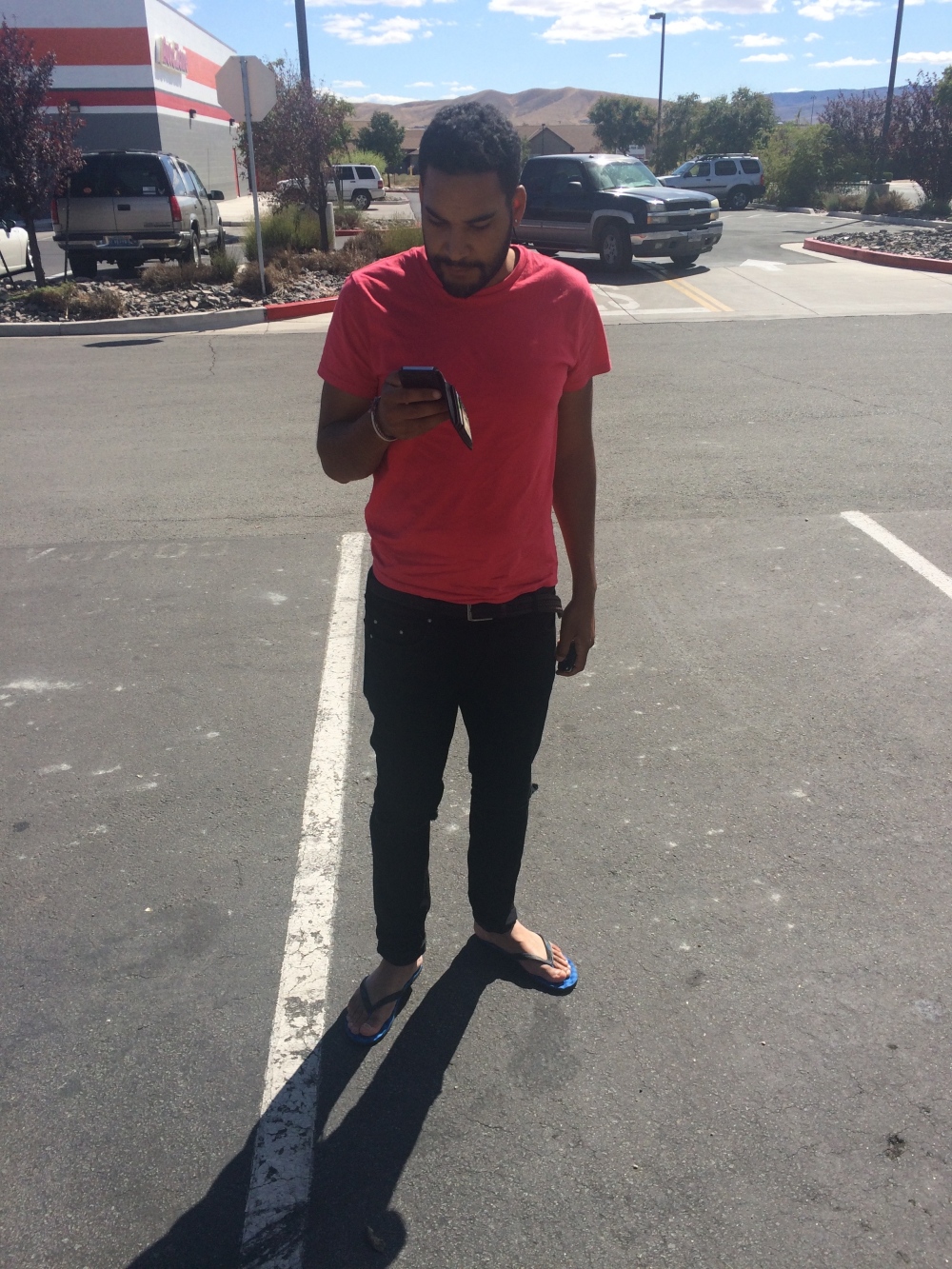 Is it me or are people getting uglier, stupider, and fatter as we go east? Welcome to middle america. We reach Wyoming at night and sleep in the trunk of the car. weird I know. It was so damn cold that night we grabbed at each other like we were our own personal space heater. We finally took a shower at a KOA we had to sneak in because we didn’t pay. It was the perfect shower and the warm water purified me. It washed away 3 day of filth and sin. We fornicated but we thwarted by the close confines.

We made it!..(ticket gate at Yellowstone)

“The south entrance is closed due to a snow storm. If you want to take the west entrance its 3 hours away” the park ranger dictates to me. She looks down from her perch as we sit in our idling car at the south entrance. Her face was calm and unwavering like a judge passing down a terrible sentence. Look lady do you have any idea how long we have were driving!? but that was what i was thinking

Ok Thank you is what I said

we didn’t have much of a choice, Sabina was sleeping so I did all that driving but at least I was listening to Atlas Shrugged a much better novel. I swear Ayn Rand lives in the world of absolutes, all her characters are either unyielding heroes of the William Wallace variety or spineless nitwits.

I was amazed at all the snow the speckled the Yellowstone landscape as we finally reach the west entrance. Driving through the God smote landscapes felt like Jurassic park. Sorta I mean there are countless beasts of the northern wild roaming around in such a carefree manner. We pulled along side a massive buffalo. These creatures are dope. but like dopey. 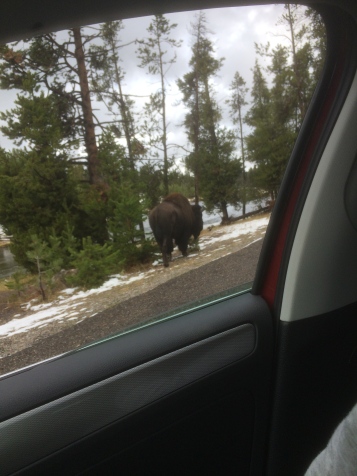 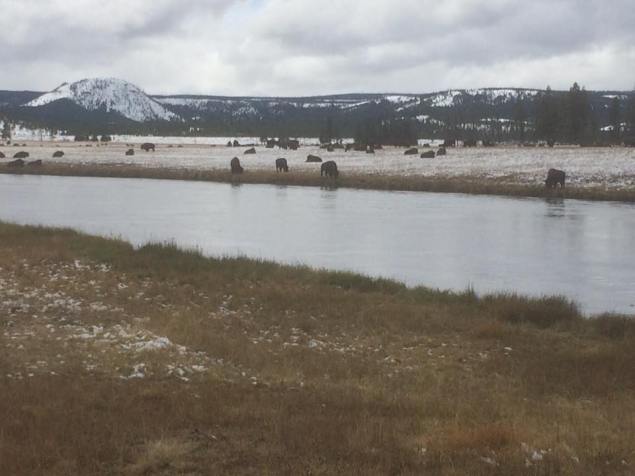 I had Bison Jerky one time.. tasted like beef jersey just costed more. I found the geysers of Yellowstone profound, some sat still, others gurgled like a mountain spring and some ejaculated a hot frothily mix of sulfur and mineral water several feet in the air. Your not allowed to but I would have loved to swim in some of the hot pools of light blue water with a ivory white basin. We didn’t have much time in Yellowstone so I was like a giddy child running from one attraction to another often leaving Sabina. She was sullen at my negligence and acted aloof as I tried to reengaged her. 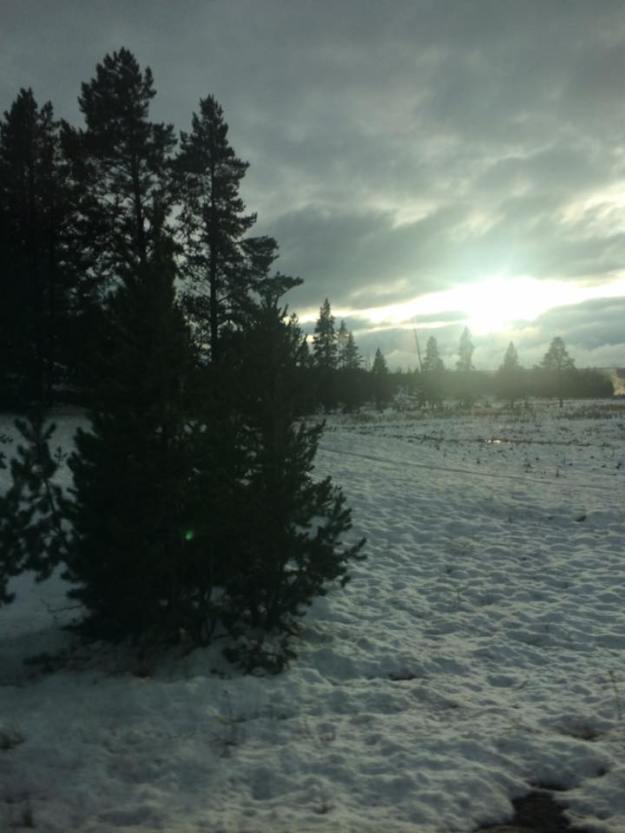 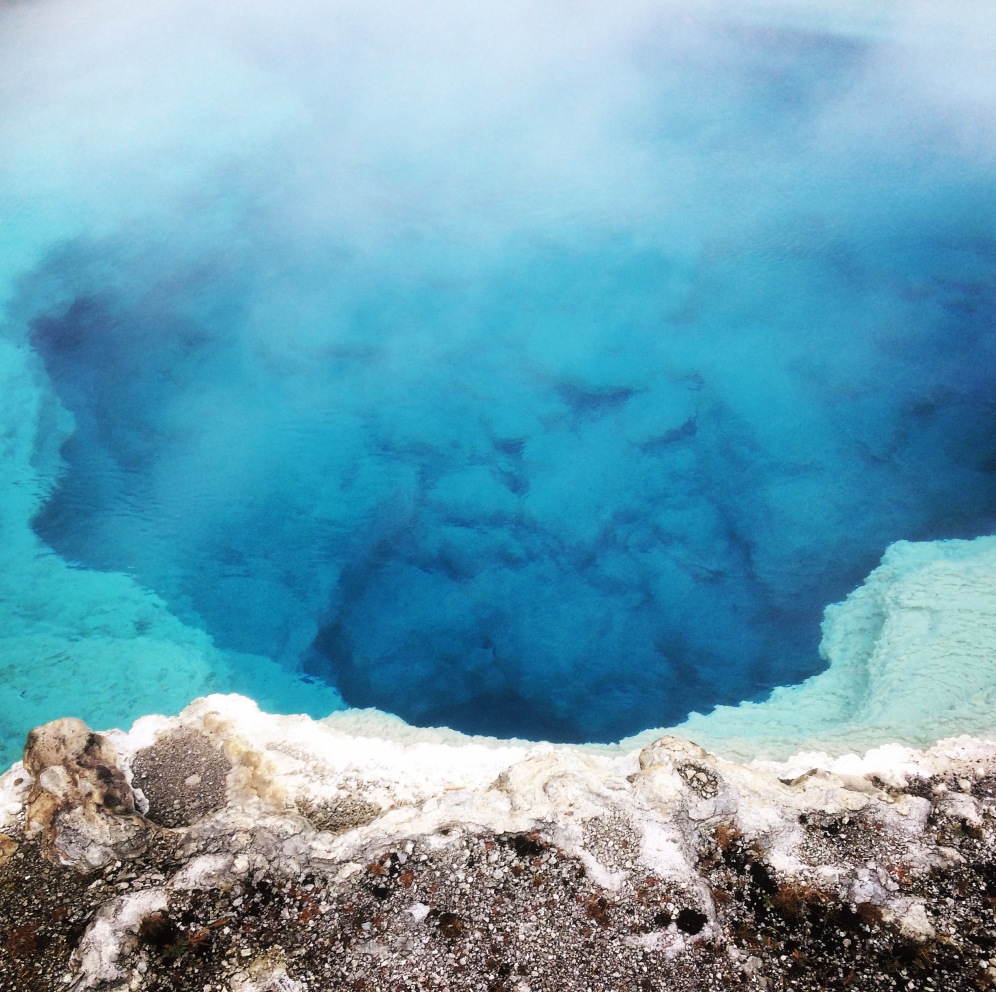 We were still trying to get out of yellowstone and the sun went down. it started snowing and I could barely see anything plus I was tired. It sucked.

The next day we drove nonstop to San Francisco to visit my sister and her boyfriend Dion. I slept while Sabina drove. I couldn’t relax I kept jolting awake thinking she was gonna crash or something. She has a strange but eclectic music selection. It was usually calm tho it had the smoothing effect of water kissing the shoreline and id fall asleep again. Is that the golden gate bridge? No wait, I don’t know. Why are there so many bridges in San Francisco? This traffic sucks. We meet my sister for Thai. We had to stow all our shit in our trunk in leu of the plundering heroin junkies that lurk about. They will break your windows at the first sign of loot. I slept at my sisters house, first time in a bed for a while it was epic, we overslept. The next day we had ice cream at my sister friends ice cream store. Her store was like mine just better in every way. Ice cream froze my soul.  Me and Sabina got in a fight I was feeling vulnerable about my ice cream store failures. Instead of consoling me she basically attacked my apparent lack of business acumen. I turned cold and vacant as we separated as we wandered the Japanese tea garden in reluctant search of each other. I wanted to try Lukes lobster but for 19 dollars was reticent. I was wearing flip flops all day and with the amount of walking I had searing pain in my feet. I had to take them off and walk barefoot. We past the buliding from the TV show Full House. I never saw that show… at least that I can remember.

We drove to Yosemite to get there at night, set up out tent and camped out. We kept hearing wild animals shuffling outside out tent scaring us shitless. We had our car alarm keys with us in case shit when down. It was so damn cold that night we slept shivering in our frozen vestibule. I was not a happy camper. See what I did there?

Yosemite was underwhelming. The valley itself was a sight to behold but unless you wanted to like scale mountains it was relatively boring. We did manage one hike to mirror lake. Sabina was babbling into my ear about vegan diets and Canabalism. I feigned interest as I tried to enjoy mother natures luscious womb. The hike ended at mirror lake. Since it was fall and dried up it was more like a glorified puddle. 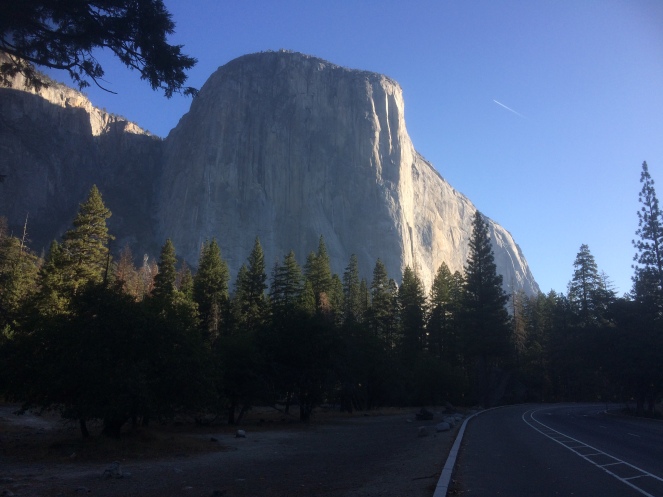 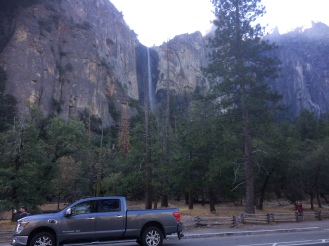 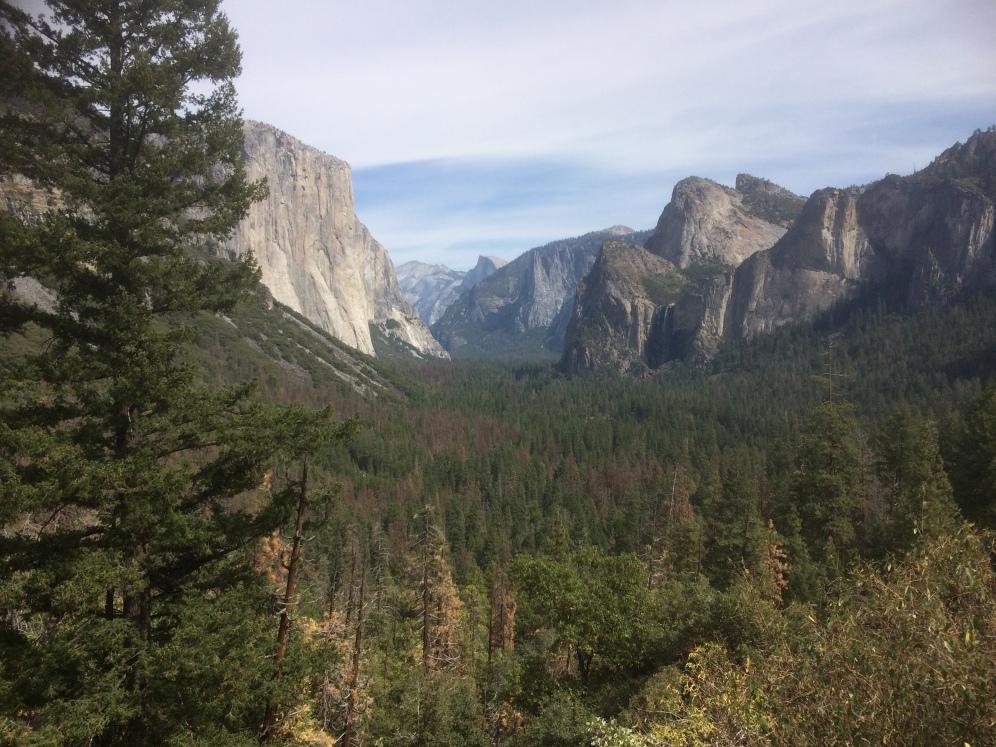 We drove directly for Sequoia national park. These massive trees fascinated me since I was a child. I strained my neck over the steering wheel to see these crazy trees. I had to stop the car an get out i was in such disbelief. To think some of these trees were here when Caesar was crossing the Rubicon is unfathomable. The interesting thing about sequoias they evolved that lighting strikes helps them grow. The subsequent brushfire destroys all the shrubbery allowing the fire hardened sequoia seed to usurp all other forest growth and flourish. 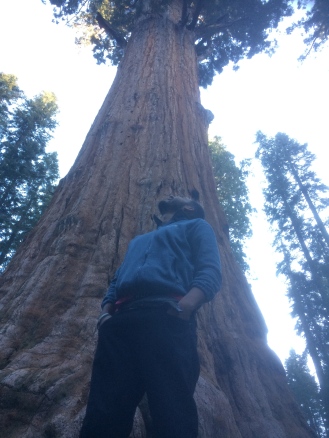 We slept under the stars that night. The lack of light pollution allowed every star to be visible. It was like a glittery plush blanket of light laid out just for us. We were still pissed at each other but the cold wouldn’t allow our bodies to act on it.

We spent an hour the next day in Starbucks arguing over what was gonna be our next audiobook. We finally settled on Dangerous Liaison but after an hour it was unbearable. I picked The Way of the Peaceful Warrior. We arrived in LA at around 4. It was pretty easy to find parking around walk of fame.

who are half these stars for?  Morgan Freeman is always watching me.  Met up with my caricature friend who looks like Kimbo Slice with an affinity for the color black. He starts rapping to the beat of a RJD2 song. I was impressed. I tried to be a rapper in 10th grade i’d rap about the Pythagorean Theorem, it wasn’t good plus I hate math so it was an odd choice. Sabina,Olya, Damion,Sam and me met up in 50’s milkshake diner. We were there for an inanely long time before we dip to refreshing bar with watered downs rum buckets. We ended up falling asleep in our car outside a middle school that night. awaking..” I startled like a guilty thing at a fearful summons” when I saw teachers pulling into work I jolted. I got dressed to leave in the early morning hours in our sticky fumblings. We head to the santa Monica Pier. Its a lot smaller than I Imagined, a lustrous hue of morning lingered as the sun rise lifted the morning fog.

on our way the the grand Canyon we stop at Las vegas for the night two days before the the deadliest mass shooting in american history. I never saw Sabina so ecstatic, her eyes sparkled with a misty impotence looking at the splendor that is the Vegas Strip. She puts on the her sexiest outfit. It makes me forget I’m still mad at her. “Lets do the slots with the pull handle!” she looks at me eagerly thrusting a fistful of damp cash at me. We zip and zag between slot machines winning tiny jackpots here and there. We didn’t get out on top tho I lost like 100 bucks at roulette and 100 in black jack. “Thanks for playing” the dealer said in a monotone

I was pretty pissed but Sabina would scruff the back of my head her lingering fingers calmed me. we walked the strip at night catching an Uber before we reached the Luxor and Mandalay Bay.

We had two days to make it back so we basically drove nonstop to Newburgh.
It was and emotional voyage as a well visual. To be with someone for 11 days straight can really flesh that relationship. Although there were bad spots it was generally a positive experience and il never forget and certain songs with bring me back to those never-ending highways.