” Panicking, I broke the door down and saw her motionless in the bathtub full of water”

Las Vegas is phony and only people desperate to escape there own lives would appreciate the blatant facade. Caesars place is cement not marble. The Eiffel tower is steel not iron and even the people become fake fastidiously following the motto what happens in Vegas stays in Vegas. It sounds like a heartbeat but doesn’t feel like one.

To quote Chuck Palahniuk  “soap opera, you know, real people pretending to be fake people with made-up problems being watched by real people to forget their real problems.”

I had been living in Vegas for three weeks already drawing caricatures on Fremont Street. What started as work turned into a hedonistic escape from my annoyingly pedantic nature. It wasn’t the panoramic vistas of the desert or the parties that ended up being the most memorable, It was my LAST night in Vegas.

I bought a bottle of Bacardi 151. I was on a budget and it seemed economical.  It tasted like death, incinerating the pallet in my sun parched throat. I offered shots to my hostel mates as we played drinking games and listened to Disney songs.

At Midnight I took an Uber to Light a nightclub in Mandalay Bay Casino. I sneaked in without paying a cover.

I shuffled my way through the packed nightclub to the bar. I stood there edging my way to the bartender so I could order a drink.  I ask for water to offset the 151 that was coursing thru my alcohol soaked veins.  “That will be ten dollars” the bartender said with  hurried impatience.  Deadpan, she hands me a bottle of Dasani. I look at it increduously, too shocked to say anything.

“Your getting WATER?” a sarcastic voice purrs demurly cutting through my thoughts.

Its the first time I saw her.

She sprouted up around me like jungle grass. She presses her tiny body up to me with her fruity drink in hand. Her perfume sent a dizzying medley of sexy odors through the club. She looked up at me with her glossy brown eyes.  She’s drunk but she’s holding it together well.

“So what are you doing here in Vegas?” I asked politely.

Her upperlip incased in dark purple lipstick curled “I’m a model” she blurted out proud and matter of fact.

“Im here for work its my first night out in Vegas.. Im from Albuquerque” she says coyly as she produces her State ID.

I looked down at it “Ariel, I like that name”.

I suggest we go dance. I grab ahold of her hand and lead her to the sunken dance floor. Hip Hop is blaring from the speakers with the bass reverberating my rib cage. The dance floor was packed with gyrating hips and emotion sweat. The multicolored lights crisscrossed the throng of pulsating party goers illuminating the darkness.

She drops her hands to the floor and throws her ass back so hard I fell to the FLOOR. When I got up I had to hold on to something to keep her from knocking me over. She turns around and grabs my head and pulls me down to her five foot nothing stratosphere.  Looking at me with her brown bonfires of passion she grabs my head sucks the ice cubes out of my mouth. She turns around and throws her ass violently back into my hips. She keeps using this short guy in front of her to balance herself. He looks back confused and slightly emasculated. Her dancing created a diaspora,  everyone was looking. I looked back sheepishly. A middle aged lady leans over to me and murmurs..

“When I grow up I wanna be just like her.”

“Lets get a drink” I suggest as I grab her hand and lead her off the dance floor.  I offered to buy her a drink but reconsidered after seeing her stumble up the stairs, I order myself a Long Island Ice Tea.

As we are waiting I lean forward to hear her. Her tongue darts out of her mouth and consumes my entire ear in a tongue lashing fury. She pulls away looks at me with her luminous eyes and SPITS my earring into her hand. She somehow undid it from my ear with her tongue.

I bring her to a less crowded part of the club so we can dance without bumping into everyone.  With more room she dances even nastier. She lifts her leg on the railing and gyrates her hips in a way that had she lived in the biblical city of Sodom they would have stoned her to death. Bouncers keep coming up to me saying “You guys need to tone it down.” Buttons keep popping off her blouse and now her bra is COMPLETELY out. She decides to take off her shirt and spin it around her head like helicopter.

She’s SHIRTLESS in the club.

Thats when the bouncer comes to kick us out with his seizure inducing strobing flashlight. I basically dress her like a squirming five year old late for school and we leave the club.  I call an Uber.

The Uber shows up and the driver looks at me TERRIFFIED. His eyes oscillating in thier sockets “Is she gonna be ok dude? I can pull over if you need me to” his voice trembling with worry. Two minutes into the ride she throws up inside the Uber. The driver abruptly pulls over. He gets out and starts feverishly rummaging throughout the trunk looking for paper towels. I clean it up and layer the apologies on heavy and thick. She sits in the back seat with her head in her lap. I tip the driver twenty bucks and apologize profusely.

I carry her syrupy body through the lobby of her Baymont Hotel. She fishes her room key out of her vomit soaked boots. The front desk guy is bemused at my exasperated expression. I get into the elevator. And yes she did throw up again in the middle of the elevator. 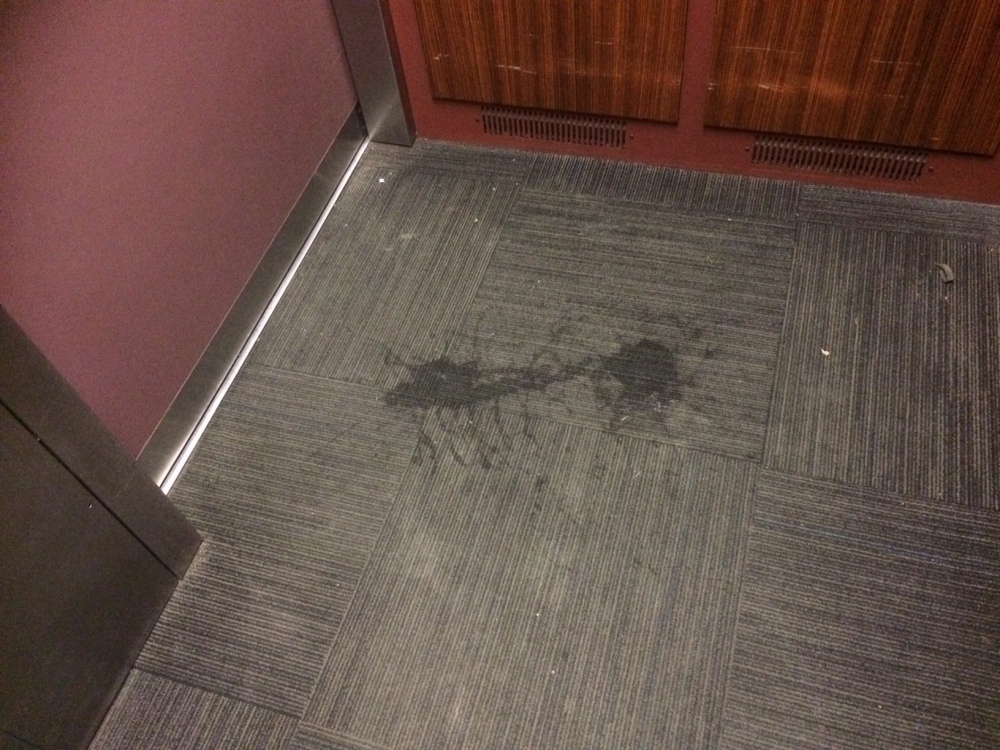 We get to her room and she stumbles into the bathroom locks the door and runs a bath. I wanna leave but I want to make sure she gets into bed ok. I wait till thirty minutes go by and I can’t hear anything except the constant running water. I bang on the door to see if she’s ok but I get no response just the water. Freaking out I starting sucking in air like a mackerel on the beach. I’m trying to think what to do so I  decide to break the door down! The door bursts open. I stumble inside to see her naked in the tub full of water right at the percipice. She is motionless slumped in the tub her nose inches from the water. Looked like the suicide scene from that movie Rules of Attraction. I reach down, drain the tub and pull her groaning body from the tub and wrap her in a towel.  I carry her to the bed she has goosebumps all over. She’s starts moaning  “ohh baby” as I carried her languid body in my arms. She looked innocent and clean  not at all like porn star that humped up a funky lather beneath a mob of Dirk Digglers.

I tuck her in. She throws up again in bed. I move her away from the throw up and make her to drink water against her various complaints. I put her back into bed and leave. As I get down stairs and the receptionist has a phone call from her agent. I take the line and explain everything to him. He was skeptical, he thought someone drugged her or something. He’s like “she gotta be up by seven, She got a scene to do.” he says in his panicky voice.